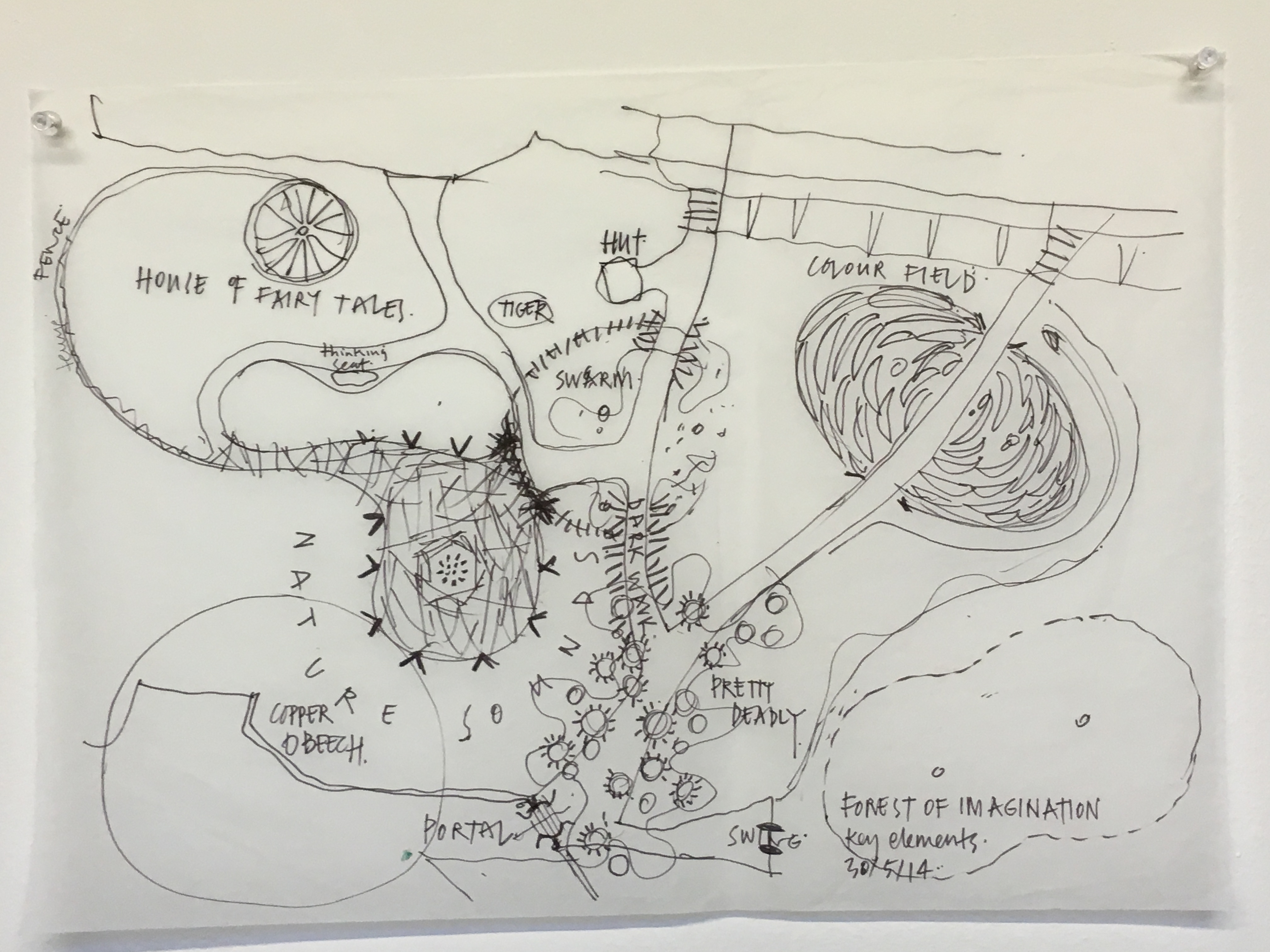 The Forest of Imagination exhibition is presented during the month of The Big Draw and a series of workshops for schools and young people delivered by 5x5x5=creativity, an independent arts-based action research organisation which supports children in their exploration and expression of ideas, helping them develop their creative skills. The workshops are kindly supported by the Wiltshire Community Youth Area Board.The exhibition runs from 5 – 29 October 2016.

Andrew Grant is the founding Director of Grant Associates, formed in 1997 to explore the emerging frontiers of landscape architecture within sustainable development. He has a fascination with creative ecology and the promotion of quality and innovation in landscape design. Each of his projects responds to the place, its inherent ecology and its people. He is known for a creative approach to ecological / sustainable landscape design and the integration of landscape with engineering and architecture to create distinctive contemporary places with a strong ecological character.

In 2012 Andrew was awarded the title of Royal Designer for Industry (RDI) in recognition of his pioneering global work in Landscape Architecture and is also a Visiting Professor for the Department of Landscape, University of Sheffield, UK. In 2010 he was made an Honorary Fellow of the RIBA reflecting the strong relationships he has developed with many of the leading architects in the UK and abroad. He has been involved in all scales of development from sub-regional planning of National Parks, strategic planning of new towns and green infrastructure strategies through to the design of particular landscape spaces or components. Andrew has worked on a number of high profile award winning projects and has collaborated with some of the top architects and engineers in the world. Andrew led the design team on the £500million Gardens by the Bay project at Bay South in Singapore which won the Building Project of the Year Award at the 2012 World Architecture Festival. Andrew has been invited to present the work of Grant Associates at conferences around the world and has appeared in a number of radio and TV programmes and documentaries including for the Discovery Channel and National Geographic.

Andrew's drawings for Forest of Imagination are playful and propositional. They exemplify how a designer thinks through drawing and how, through this process, creative ideas are shared and communicated, and form plans for development and implementation.  The Forest of Imagination drawings re-imagine familiar spaces and propose a new and heightened sense of nature in an urban environment.

The ambition to inspire children and young people in Trowbridge to re-imagine their own environment and design their own Forest of Imagination lies at the heart of this drawing project. Children, including those from the John of Gaunt School and The Mead School, have been involved in the project and their artwork is now presented alongside that of Andrew Grant, and also Ruth Thorp (illustrator), Perry Harris (cartoonist) and Anthony Head (interactive artist and Director of Illuminate Bath) at Drawing Projects UK. A Family Day will be held on Wednesday 26 October from 2-4pm. Come along and see these playful drawings inspired by a Forest of Imagination.

Sign up for the Drawing Projects UK email newsletter